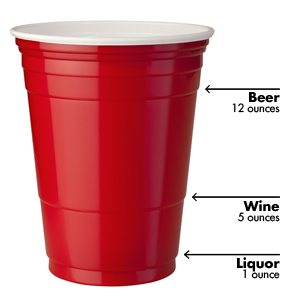 Count Your Drinks, Not Your Cups
When drinking alcohol, people often mistakenly base the quantity of alcohol consumed on the number of cups they drank. This can lead to over consumption of alcohol. Students who choose to drink alcohol should consider the type and amount of alcohol inside their cup. They can use the lines in a red cup (like the one to the left) to help them keep track of the quantity of alcohol they are drinking. The bottom line can be used as a marker for one drink of hard liquor. The second line can be used to measure one drink of wine. The third line can be used to measure one drink of beer. On average, it takes the body approximately one to two hours to eliminate the alcohol in one drink.

What is a Drink?

*Depending on factors such as the type of spirits and the recipe, one mixed drink can contain from one to three or more standard drinks.

P.U.B.S. Signs of Alcohol Poisoning
Use P.U.B.S. as a guide to the symptoms of alcohol overdose:

Students who are not sure whether or not to call for help should use P.U.B.S. Student who see even one sign of alcohol overdose should call 911.

Source: Gordie Center for Substance Abuse Prevention at the University of Virginia